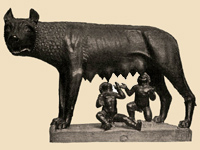 In I segreti di Roma, as we said, Corrado Augias notes that “Rome among all the greatest cities of the ancient world – Nineveh, Babylon, Alexandria, Tyre, Athens, Carthage, Antiochia – is the only one that has continued to exist without any interruption, never reduced to a semi-abandoned village…”.

This ancientness of Rome is revealed by many aspects that go back to pre-Christian (or so-called Pagan) times, in spite of the fact that the city is the centre of Catholicism.

What can happen here is that the columns of a Christian church come from a temple of Venus, or that the porch of a palace built in 1909 is sustained by a buttress from Nero’s circus (Augias).

The character of the true Romans (romani di 7 generazioni, namely seven-gererations Romans, as we say) is often crass, easy-going, cynic, wise & witty: all at the same time. Great Roman actor Aldo Fabrizi (see picture below) was a pretty good specimen. This mixture smells of centuries and of moral values going well beyond the civilization of Christ.

This Christian/pre-Christian mix is palpable. Federico Fellini’s films depict it in ways grotesque though eloquent (Roma, above all, but not only).

Following is Roma’s poster and the famous Catholic Church Fashion Show movie sequence from that same movie. It may appear an excessively wild scene, but it is hard to deny how it is also much revealing.

In his novel Rome (Augias p. 11) the French writer Emile Zola wondered if Raffaello’s ideal figures didn’t after all flash the divine and desirable flesh of Venus under the chaste veil of the Virgin; or those mighty Michelangelo’s frescos didn’t after all refer to the nature of the Olympian Gods rather than that of the Hebrews’ God.

“Was indeed Rome ever Christian – Zola asks – after the primitive age of the catacombs?”.

Also the pre-Christian role of government of peoples still survives. Imperial Rome is resurrected into Catholic Rome, governess not of the nations any more but of the minds and spirits of men.