The ancient Greco-Romans had a totally different attitude toward sex (so pls the minor or the puritanical shouldn’t read further.)

The beauty and natural perfection of these bodies convey in fact the idea – a very simple idea, this very gifted Greek student I recently met would say – that sex wasn’t perceived as lewd or licentious; it was felt instead as one of the joys of life.

It is so simple:
as simple (and beautiful)
as a Greek temple.

Sex was actually enjoyed naturally though in ways most contemporary folks wouldn’t even imagine, especially when we consider that these statues were somehow linked to rituals and religion. 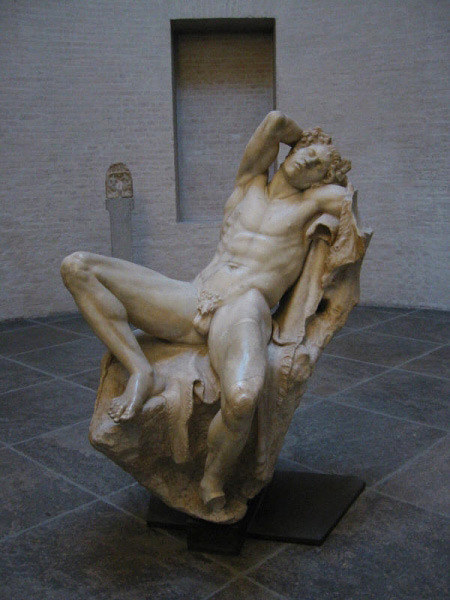 If we could forget that these are classical statues, if we could regard them just as they appear to us and out of their context, we’d surely see them as pornographic.

According to the Wikipedia:

I do not quite agree with Wikipedia on how and when the modern concept of pornography was conceived, seeming this to me a totally Anglo-Saxon centred observation, forgetful of how history can be ancient [a stupid – and not true – thing to say, october 6, 2019].

I might be wrong (or right) but who the hell cares, chissenefrega, this whole Victorian thing being incredibly funny.

I can see these prudish Victorians feeling themselves as the heirs of the Romans (which actually they were, at least in my view) who much to their horror found out how perverted the Romans had been (at least in their view), while together with the Italians they were uncovering all these sexy statues and frescoes.

I am imagining their shocked pale faces and am especially fantasizing about their shamefully and hastily helping the Neapolitans to hide somewhere the abominable truth.

The Neapolitans, incidentally, were at that time probably laughing at them a bit too, being of course much less disturbed by all those “frank depictions of sexuality” (try to guess why, dear reader … ).

Getting back to the Ancients, this Aphrodite of the Beautiful Buttocks is uncovering herself and looking back (and down) in order to evaluate her perfect behind.

For which reason, who knows, this statue dedicated to Venus-Aphrodite might exactly represent both the winner and her behind. I mean – it’s sheer historical interest, of course – there’s a chance we are looking at her real ass (not at usual idealized hindquarters according to Greek aesthetics.)

And, the self-evaluation of her buttocks – pretty sure of that – was even more obvious than it appears today since statues were mostly painted in full colour, therefore the direction of her gaze was probably more evident, her pupils being painted.

This cult of Venus-Aphrodite with beautiful buttocks appeared in Greek Syracuse (Sicily, Italy,) according to some ancient author, since this is where the sisters apparently lived.

Again, needless to say, it would be inconceivable nowadays to dedicate a sanctuary, a holy place, to a goddess because of a girl’s hot butttocks (read in the Wikipedia the whole peculiar story of the two lovely sisters.)

Venus was the goddess of beauty, fertility and love.

The Roman Venus was born around Lavinium, according to Strabo. If true it was not by chance since Aeneas, the great Roman ancestor and son of Venus, landed in that area and founded the town after the name of Lavinia, his wife. The Romans by the way were children of Venus and of Mars, the God of War: love and war – a weird mix, isn’t it.

This I am thinking while strolling between the Colosseum, to my left, and the temple of Venus and Roma, to my right, between these symbols of life and death. How multihued the Romans were.

The Greek Aphrodite was instead born in Cyprus – where the Greek student comes from, although I do not believe in signs, like Brasilian Coelho does.

Young couples gathered close to the Venus temples for petting, necking and even coupling (green areas with temples where common in Rome.) People were probably discreet but what is interesting is that their loving felt somehow enhanced, even sanctified, by the presence of the Goddess, which is again unimaginable today despite our so-called sexual freedom.

Think of a today’s scenario where men and women flock near a Catholic or an Anglican, or a Lutheran church, in spring time, or in any time, for petting and all. I mean, even the mere thought could offend a true Christian.

Is it good? Is it bad? Hard to say. We somehow prefer the ancient customs though it is our personal opinion.  That is, we love to think Sex to equal Beauty, love and sex to be a sublime joy that shouldn’t be necessarily related to reproduction (like ALL Popes tried endlessly to teach us.)

OK, one might say. If these are our Western roots, what the hell has then happened? Why had we to undergo such an oppressive revolution which turned one of the joys of life into something indecent?

Perhaps the Victorians had later some influence on India, a country were the Kama Sutra was written, the first great text about love and sexual intercourse – beautiful, poetic and scientific – and the Victorians arrived with their not entirely positive influence in this field of human life …

[…if what the Wikipedia says is true.  I need some feedback by my Indians readers. Update: I received extensive Indian feedback one year later]

As for the West I am sure the answer is to be found during the times when the Roman Empire turned into a Christian Roman Empire, hence from Emperor Constantine onward (4th century AD.)

The Christians were mainly responsible, in my opinion, for this change of attitude (and for atrocities committed against non-Christians soon after Christianity took over), but it’d be fair to add that numerous pagans had already become a bit more puritanical as a reaction to the excesses of the previous ages.

One last thing. Are anywhere to be found survivals of such ancient freer attitude towards sex?

I believe so. We have said (Braudel had said) that great civilisations do not die. Plus we had entitled this post Permanences III (but changed its title later.)

Ok. Let’s not spoil what is next in the Sex and the city (of Rome) series.

1) with this Roman copy of Castor and Pollux, or Dioscuri (youths of Zeus) by Praxiteles, Madrid (see below) – also enthusiastically approved by my female friend;

2) with Lucretius’ initial prayer to Venus.

Lucretius is a great Roman poet. From his verses one can get a good feel of how a real Ancient Roman felt about Venus.

So it is a pretty good conclusion for this Sex and the Romans num. 1 post.

Try to read these words attentively. You might penetrate the mysteries of a lost, arcane – though still living, still living – world …

“Mother of Rome, delight of Gods and men,
Dear Venus that beneath the gliding stars
Makest to teem the many-voyaged main
And fruitful lands- for all of living things
Through thee alone are evermore conceived,
Through thee are risen to visit the great sun-
Before thee, Goddess, and thy coming on,
Flee stormy wind and massy cloud away,
For thee the daedal Earth bears scented flowers,
For thee waters of the unvexed deep
Smile, and the hollows of the serene sky
Glow with diffused radiance for thee!

For soon as comes the springtime face of day,
And procreant gales blow from the West unbarred,
First fowls of air, smit to the heart by thee,
Foretoken thy approach, O thou Divine,
And leap the wild herds round the happy fields
Or swim the bounding torrents. Thus amain,
Seized with the spell, all creatures follow thee
Whithersoever thou walkest forth to lead,
And thence through seas and mountains and swift streams,
Through leafy homes of birds and greening plains,
Kindling the lure of love in every breast,
Thou bringest the eternal generations forth,
Kind after kind. And since ’tis thou alone
Guidest the Cosmos, and without thee naught
Is risen to reach the shining shores of light,
Nor aught of joyful or of lovely born,
Thee do I crave co-partner in that verse
Which I presume on Nature to compose
For Memmius mine, whom thou hast willed to be
Peerless in every grace at every hour-

Wherefore indeed, Divine one, give my words
Immortal charm. Lull to a timely rest
O’er sea and land the savage works of war,
For thou alone hast power with public peace
To aid mortality; since he who rules
The savage works of battle, puissant Mars,
How often to thy bosom flings his strength
O’ermastered by the eternal wound of love-
And there, with eyes and full throat backward thrown,
Gazing, my Goddess, open-mouthed at thee,
Pastures on love his greedy sight, his breath
Hanging upon thy lips. Him thus reclined
Fill with thy holy body, round, above!
Pour from those lips soft syllables to win
Peace for the Romans, glorious Lady, peace!.”

Silvestri, Berlusconi and the Emperor Tiberius