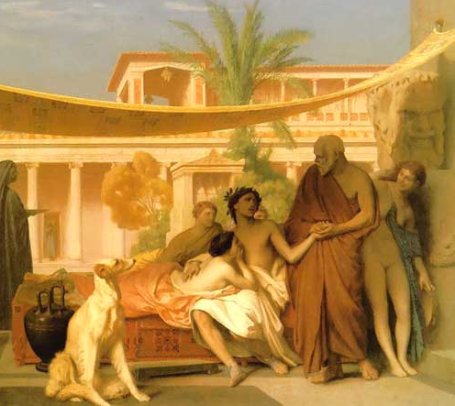 How can we live a better life (says Country Philosopher)? According to Socrates (depicted above while trying to convince Alcibiades to leave charming Aspasia‘s house) everything is attainable through exercise – I am quoting CP freely – because exercise creates a habit, any habit.

[Looking habit up in the on-line Webster we read that it is “a behaviour pattern acquired by frequent repetition.”]

According to our nature we all tend towards our well-being and best comfort, both spiritual and material – it cannot be denied, says CP. In other words we should all tend towards what is really convenient for us, the problem oddly enough being that at present we seem to have forgotten what is really convenient for us. Otherwise how can we explain that so many people are unhappy despite the fact that they possess what is necessary to live, and sometimes even more than that?

As we just said we can explain this with the fact that these people (all of us) know little or nothing of what is really convenient or advantageous, even in small trivia and in everyday practical choices. In short, there are so many people around who visibly make the wrong choices, which are disadvantageous choices. These people consequently live worse and worse, while they could live better and better.

Could this be one of the fundamental problems of our so-called rich countries (I’m asking myself)? They should be full of happy people, all the requirements for happiness (or serenity) being present. But since so many people are evidently unhappy there must be necessarily a problem of ethical confusion: people do not know any more what is convenient or non convenient to do (ethics is a branch of philosophy which encompasses right conduct and good living – a definition taken from Wikipedia).

As far as we are concerned, it is very hard to answer to CP’s question (how we can live a better life). We will only consider that the Ancient Romans, who acquired philosophy from the Greeks but who were much more practical and solid than their philosophy mentors, faced life with great success thanks to their iron will, their rationality and self-control. The scions of the well-to-do Roman families flocked to Greece to study the Epicurean and Stoic doctrines, two very significant schools of thought for Rome, which Rome was able to adapt to her needs – like everything Rome learned from others – and which was propagated by Rome in every region of the Empire.

Today we still admire Julius Caesar’s sovereign spirit, calm, always mastering himself even when facing the most dreadful tragedies, his writings & actions being a vivid testimony of his character. Caesar was though but a fruit – one of the greatest, maybe – of a civilization based mainly on reason.

Is a conduct based on this method still valid today? This question arises when reading this Country Philosopher so stubbornly convinced – like the Ancients were – of the thaumathurgic power of human rationality. Is it possible today, while confronting with everyday problems, to draw any benefit from the philosophies of our Ancient World?

We do believe (and we do hope) it is possible.

As an example, we can try to apply Roman rational wisdom to the concept of vice, meaning by this term a moral fault that can harm us. Vices can in fact ruin our life. If we drink or smoke too much, if we become sex (or gambling) maniacs we gradually (or quickly) ruin our life. Actually vices are not those horrible things depicted by priests – CP argues – and at the base of many so-called vices are in reality those pleasant things which make life worth living. Why then don’t we benefit from them? Is it true that all that is pleasurable is harmful and – as some believers say – should be prohibited? What is a Roman-like solution to this problem, since in this blog we are talking about retrieving fragments of our Romans’ ancient wisdom?

Surely abstinence is not Roman-like, it is rather monk-like. The Romans loved terrestrial life much more than ultramundane life (a world of pale ghosts to them). They loved life before death, not after death, and were not inclined to reject its pleasures. The solution for a Roman therefore doesn’t reside in renouncing to life and its pleasures. On the contrary, it resides in the correct measure in which we enjoy life, which implies moderation and non addiction, since any addiction makes us slaves of passions (pleasures), makes us non free.

A beautiful and conclusive sentence by CP: “A right measure prevents the genesis of vice, which incidentally is nothing but a measure not correct – i.e. excessive – which has become a habit.”

PS
Note. The Ancients’ reflection on human rationality is of great importance and modern philosophy and science are derived from it. Rationality should though be integrated with the modern concepts of will and imagination. There is some debate today on these topics, I will provide links as soon as I can. The Ancients practiced reason, will and imagination, of course, but didn’t theorize much and didn’t developed techniques that pertain to the last two elements.