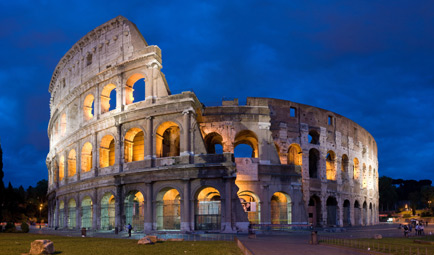 A few days ago, in a pizzeria very close to the Colosseum, I met a couple from Lübeck, Germany. She was a Catholic redhead with communicative and laughing blue eyes, born in Cologne. He was a colourless Protestant, with meditative and sad eyes of a pale blue, a vague resemblance with pilot Schumacher.

“It is a sort of Little Italy, Cologne, – he said – while I am the Germanic barbarian beyond the Roman border.”

Bizarre how the proximity of the Colosseum makes just any tourist talk history.

We didn’t chat for a while though, each of us minding our own business, kind of reluctant to human communication.

Suddenly, I really don’t know why, I opened up -a full-bodied red wine is to be held responsible? The fizzy Roman air? -, I gave this friendly and sincere look to them and shot these point-blank, out-of-the-world 4 sentences:

“I worship the music of Bach. Bach is sovereign. He is a great honour to German civilization. German music is eternal.”

I am unfortunately aware I must have sounded totally nuts. Four solemn and incautious sentences were now suspended in the Roman breeze.

They looked at me in total amazement:

No idea if they meant “too stern for an Italian” or were just talking in general.

“Heavy? Oh no, no, – I said – how can the most magnificent among composers be heavy? Bach is not heavy. Bach is a-l-l.”

His pale eyes, from an initial mistrust, sweetened up. Her smile became even warmer than before. Actually the three of us were a little moved (and probably high.)

Some additional sporadic sentences (she was proud of this German pope … they wanted to know if I was a real Roman …) concluded this little Roman scene. We said goodbye after exchanging our addresses.

Now I have friends ready to greet me if I ever get to Lübeck, a city to which young Bach arrived, if I am not wrong, after many kilometres on foot, so eager to learn all he could from his idol musician, the organist and composer Buxtehude.

I have to check better. Just found this on the Web:

Sorry if I showed off some of my German (no big deal after all lol), but how can one not love this language: of course its difficulty (and the lost wars) didn’t help its expansion.

A German friend once noted, a bit disconsolate:

“Even just the adjective, Deutsch, is difficult both to write and to pronounce. We should have changed it. But we have been stupid. Sometimes we are not as intelligent as people think.”

Bach is a son of un-romanized Germany. Rome and the classical world are not all, of course. But I am asking myself:

Is this diverse historical background somewhat responsible for the fact that Bach’s music lacks sometimes … measure and grace? Is it by chance that many Italians prefer his music played by classicism-oriented performers like American Murray Perahia or, even better, Italian Arturo Benedetti Michelangeli?

I for example adore Bach’s Italian Concert in F major (BWV 971) played by Michelangeli (and other Bach’s works played by him.)

Italian Neapolitan Maria Tipo’s Bach is another example of how Bach can be played (corrected? made more singing etc?) by Italian performers.

7 thoughts on “From the two Sides of the Roman Limes”