We talked in the previous post of a decline of the Roman Empire type of situation here in the West. Omitting economical and political aspects this time, we rather concentrated on some cultural aspects of today’s Western (America + Europe) decline which resemble a bit what was happening in the minds of the inhabitants of the Ancient Roman empire: new sects and religions gaining ground, void, ethical confusion etc. with, at the end, a winning new religion, Christianity, conquering the population’s hearts (with a little help from the Emperors) and soon becoming the official religion of the Empire.

(Needless to say, it is only for the sake of analysis that people usually separate economical, political, social and cultural phenomena. Actually they are tightly interrelated and belong to the same sphere: Man) 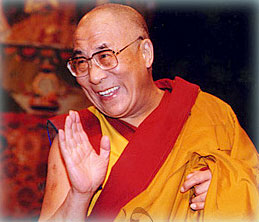 Let’s now zoom in on one of the non Western religions that are gaining ground, Buddhism. We will consider some of the reasons why this belief, compared with the Abrahamic religions, could be more endowed to confront with modern science, which might further favour its penetration (at the top of the page, a Buddhist temple at Fréjus, France; above, the current Dalai Lama).

In some books the current 14th Dalai Lama reveals his position on science and on the relationship between scientific rationality and religious irrationality. “If scientific analysis conclusively showed that certain beliefs of Buddhism are false – argues the Dalai Lama – it would be necessary to accept those scientific discoveries and abandon those beliefs.” Wow, what a big difference, we should be honest to admit, vis-à-vis the presumptions of infallibility asserted by our Catholic religion …

Buddhism seems better equipped in its approach to science since, as the Dalai Lama says, “it grants maximum authority to experience, secondly to reason and only lastly to scriptures” while the Religions of the revealed Books (the Abrahamic religions) seem to consider these elements in a reversed order.

Additionally the encounter between Science and Buddhism seems also favoured by a fundamental disposition common to both: they do not believe in God or even in a soul, since Buddhism prefers to concentrate, among other things, on conscience. Buddhism and science “share a fundamental reluctance to postulate a transcendent Being as origin of all things.” Basically it is the denial of any metaphysics.

A Rescue Guide in Times of Crisis

In general I believe this simple thing: science provides a lot of answers but still voids are left (what is the meaning of life? How do we choose between right and wrong? Are there any absolute values? etc.) that might progressively be filled up, although so far they are not, thus leaving those who rely on science only with questions unanswered and inner tranquillity precarious. Humanities are able in fact to make up for further answers (philosophy) and for reconciling our soul through beauty (art).

As far as we are concerned, in fact, novels, poems, music, paintings, philosophy, all humanistic culture, in conclusion, can somehow fill these voids. And religion? Of course religion can fill these voids too, but, although we have a lot of respect for those who have a faith, we are not religious (agnostic, not atheist), our position being that of the Roman philosopher and poet Lucretius. So we are not disposed to easily believe in revealed things or tales – hope we do not hurt anyone’s feelings – which were satisfying for men living thousands of years ago but, frankly, not as much for today’s man.

Buddhism, being a philosophy and religion without a God seems more modern (even though some aspects of Mahayana Buddhism, for example, consider the Buddha as a God). Buddhism does not force us to believe in dreams in order to find a ubi consistam, namely a guide, a point of reference.

The truth is we are not even Buddhist. We have no parachute. But we like it this way.

The Universe in a Single Atom – The Convergence of Science and Spirituality – by H.H. the Dalai Lama, Morgan Road Books, New York, 2005.

See also www.mindandlife.org for reports on various confrontations between the Dalai Lama and various scientists.

30 thoughts on “Buddhism, Science and the Dalai Lama”