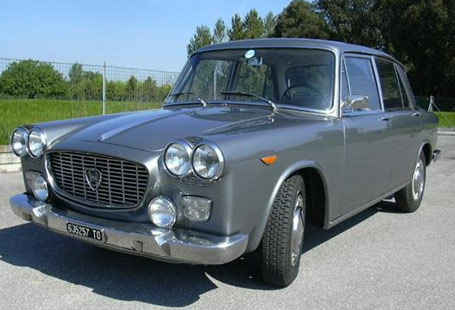 Not long ago my friend Mario took me for a drive on his stupendous vintage Lancia Flavia 1500. Although now living in Rome Mario is from Naples, one of the biggest towns of the Italian Mezzogiorno, and he is so proud of his gioiello (jewel) which he seems to care for more than he does for his wife and children.

The trip had been great, the green and smiling countryside north of Rome had shown so sunny and refreshing, and our glowing Lancia had well behaved so far despite its age (1960).

On the way back to Rome along the via Flaminia I exclaimed merrily:

“Diavolo, this car is a gem, it has rolled as smoothly as olive oil and we didn’t have any problem during the whole drive.”

Mario snapped with a worried look:

“Oh you shut the hell up! Do you want the car to break down? Do you want anything bad to happen to us?” as if the mere utterance of happiness would attract us ill luck or the envy from someone.

Well, the envy from whom?

A good answer is provided by the modern Greek writer Nikos Kazantzakis. When he was very young he once went travelling all over Italy. When he got to Florence (see image above) he felt so happy in front of all those palaces, statues and paintings that he felt that the rights of the humans were somewhat overstepped. As a young and superstitious provincial – he writes in his autobiography – he was terror-stricken for “as I well knew, the gods are envious creatures, and it is hubris to be happy and to know that you are happy.”

So, in order to counterbalance such blissful state of mind, he bought a pair of narrow shoes he wore in the morning and which made him miserable and “hopping about like a crow.” He then changed shoes in the afternoon so he could walk weightlessly and thus vent all his joy. He strode along the banks of the Arno river, he went up to San Miniato etc. but the next morning he went back to his narrow shoes (and to his misery again).

More than 23 centuries before Kazantzakis’s trip to Italy, the Greek Herodotus, the first historian of the Western world, wrote about a man extremely fortunate who got everything from life and who was tyrant of Samos, a beautiful island of the Greek archipelago (see a picture by Nasa above). His name was Polycrates and he was so fortunate and his wealth and power so great that one day his friend Amasis, pharaoh of Egypt, wrote him a letter saying:

“Beware Polycrates: such fortune being not allowed to humans, get rid of whatever is most precious and dear to you in order to escape from gods’ wrath.”

Hit by fear and understanding that the pharaoh’s suggestion was wise Polycrates began reflecting on the things he possessed that were the most beautiful, precious and dear to him and among them he chose a stupendous ring with an emerald set in gold he was always wearing day and night. He then went on board of a ship and ordered the sailors put out into the open sea. Once far away from his island he took the ring from his finger and threw it away into the deep.

What happened is that some time afterwards a fisherman caught such a big fish he thought it deserved to be given as a present to the Lord of Samos. He thus brought the fish to the palace and when the servants cut the fish open they saw it contained a beautiful ring and brought it to the tyrant.

Polycrates much to his horror recognizing the ring finally understood that the envious gods had something in store for him.

After a few years he was captured with guile by the Persian governor of Sardis, Oroetes.

His life had been happy and glorious. Ignominious and horrible happened to be his death. Oroetes had him impaled and then crucified.

PS
The next post, Knowing Thyself, connects the three episodes and provides the reader with some explanation regarding Greek gods’ envy.

21 thoughts on “Gods are Watching with an Envious Eye”