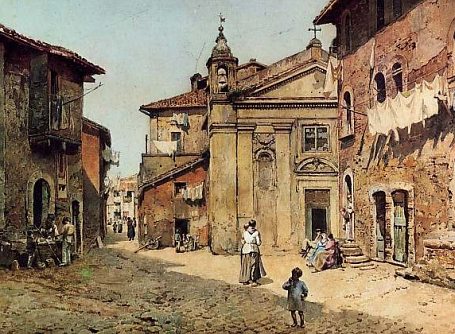 After some hesitation I have decided to post a few excerpts from the memoirs of Carlo Calcagni, a Roman born almost one and a half century ago, and a person very close to my mother’s mother (her eldest brother actually.)

These pages offer a lively cross-section of the social and cultural life of Rome spanning from the first half of 1800, at the time of Calcagni’s grandfather, Count Filippo Calcagni, until the All Saints’ day of 1947, the date Carlo finished writing his memoirs.

Additional information, plus a link to the original Italian text, is provided at the end of today’s first excerpt.

Read all excerpts posted so far in English or in Carlo’s original Italian text.

I was born in Rome on the 12th of August a few years after 1870, the date of the Porta Pia breach, in a house at the foot of the Janiculum, in via Garibaldi. I don’t want to say the exact year of my birth for a residue of reasonable reserve. Why this reserve, a weakness, a coquetry quite odd in a man? I don’t know but I will not tell you. I am old, that’s enough.

I am 1.75 cm. tall (I have not been able to enter the grenadiers as did my brother Gigi, who was 1.82 tall) and I weigh 84-86 kg: I am therefore rather well built – with not too much belly also, a strong type in short and muscular. I was in fact very strong and did practise all sports when nobody was speaking of ‘sports’ yet and people thought I was half mad. My bearing – erect, frank and easy – I  owe perhaps to these exercises.

My eyes are cerulean, almost pale-blue once, and my hair is light brown – which is a bit uncommon for an Italian. My nose is perfectly straight, bending neither to the right nor to the left, a thing unusual they say since generally noses are slightly bending somewhere.

Now naturally at my age my hair is white. My face was once regular and fine, with open and calm expression, rather exotic both in features and complexion: somewhere in between an English and an American, so that I was often mistaken for a foreigner from those lands.

Robust health, capable of bearing whatever toil and discomfort, even unexpected and without preparation, capable of not eating and not drinking, whenever busy or occupied in something that completely absorbed my attention. I was after all the son of my father who, among his numerous aphorisms (many will arrive soon,) repeated almost continuously to us: one must eat what is necessary not to fall headlong.

And he always had preached and showed us how the body must be accustomed to serve us in everything and not to be our master. During our usual walks on foot “Dad I am hungry”, “Dad I am thirsty” we often cried.

“Shame on you, you are what, an animal? If you are hungry put a small pebble into your mouth. If you are thirsty hold a blade of hay or straw between your lips.”

“Dad I’m tired” and he started to run with gymnastic pace to urge us to follow him and not be left too much behind. In those days we were very small, 9-10 year-old.

[tomorrow another page by Carlo Calcagni regarding his grandfather’s sudden death in a coach accident, which left his father a 3-year-old orphan]

Additional note. Carlo Calcagni’s memories have so far circulated only among relatives and friends. Now that nearly all these people are no more I hope I won’t hurt anybody’s feelings if I let some excerpts be known outside such restricted circle.

I think nobody was more Roman than Carlo, gifted with intelligence, humour and a good nature typical from here but also peculiar to him alone.

He tells us of a disappeared Rome while he vividely depicts the three social milieus that made up the Roman people of his time: the aristocracy (to which he belonged though deprived of financial means,) the generone (a middle class of business people and tenants of the large estates owned by the aristocracy,) and the popolino or populace – described so glowingly by the Roman poet Giuseppe Gioacchino Belli – he had contact with since his family lived in Trastevere, at that time the slums of the city (the painting above depicts the church of Santa Bonosa in Trastevere, destroyed in 1888 during the construction of Piazza Sonnino and of the high stone embankments of the Tiber.)

[Rome between 1800-1900 had no industry nor any class related to it. Industries were discouraged by law since the Italian monarchy was afraid of the ‘socialist mob’]

I have provided above a link to Calcagni’s original text, written in a delightful vintage Italian with a Roman scent. My English translation is inadequate and is a work in progress.
These memoirs are posted for no commercial purpose. The copyright belongs to the author’s relatives.