While I am preparing a couple of posts I want to gain time and show readers something of my life (house, places where I live etc.).

Above you can see one of my usual promenades along the ‘via della Domus Aurea’ in the Colle Oppio (Mons Oppius.) Oppius is part of the Esquiline Hill, the highest of the Roman Seven Hills (Septimontium) and a fashionable district at the end of the Republic and at the times of the Empire (Cicero for example had a house there.)

Going uphill to my right (another promenade of mine) we in fact get to the top of the Esquilinus, a no man’s land outside the city’s walls in Republican times, full of witches, assassins and a place for slaves’ executions (see a post of mine on this) until emperor Augustus totally redeemed the area and made it residential.

The lower Mons Oppius – where we are now – was part of the Augustan Regio III. Later emperor Nero had there built his Domus Aurea with its vast gardens (after the great fire of Rome in 64 AD). In his extravagant villa the flat area you can see above at the base of the Amphitheatrum Flavium was occupied by an artificial lake.

By the way, Regio III was also called Isis et Serapis. The reason is two important nearby sanctuaries dedicated to the two oriental deities – very much to the point as for the mystery religion stuff I am about to narrate.

Should we in fact pull back from the Colosseum and walk 50-70 yards we’d cross the perpendicular ‘Via Serapide’ (see image above.) Continuing in the same direction for a further half km we’d also reach ‘via Iside’.

I almost every day walk downhill along the ‘via della Domus Aurea’. I border Subura on my right (the red-light district where penniless Caesar spent his youth) and the amphitheatrum on my left. Then I finally reach the forums area along the ‘via dei Fori Imperiali’ built by Benito Mussolini.

Right in the centre of Imperial Rome I admire the elegant remnants of a majestic past.

See below the base of the splendid Colonna Traiana or Trajan’s Column in the Trajan‘s Forum, 30 meters high (98 ft) and made of candid Carrara’s marble, the same marble later used by Michelangelo for his David, or by Antonio Canova.

I have a terrace in my apartment in the close-by (1 km) Caelian Hill (or Mons Caelius, another of the Seven Hills.) On the terrace opposite ends there’s a shameless Venus on the left corner and a caste Minerva on the right one. Pretty symbolic, isn’t it. The house was built in the 1920s and these are statues typical of that period.

Now Minerva’s time below, she being covered with snow. Our lemons are covered with snow as well and our terrace, well, it falls apart a bit. We have invested our money in a touristic facility and we are waiting to restructure our home as soon as we can.

Look once more at the poor lemons. They cannot bear cold climate. Will we ever make limoncello this year? Below is the dining room with the piano. 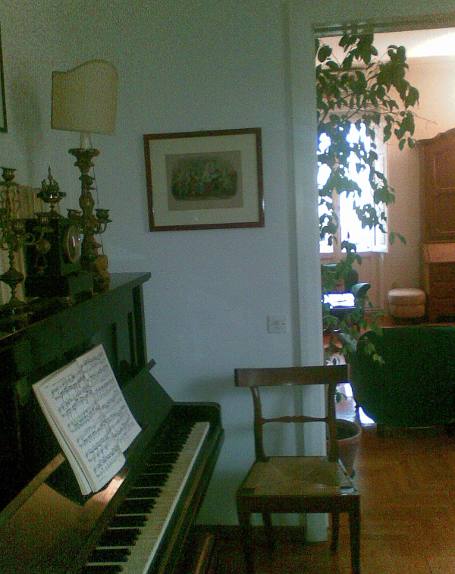 The same room is now seen below looking towards another window. The piano is behind on my left. I love the Lebanon cedars or cedri Libani in front of our windows. Such important plants for the life of the ancient Eastern Mediterranean!

And this is me in Apulia (Ἀπουλία) 3 years ago.

I wish you all a very good week readers.

39 thoughts on “Snow in Rome. Here some pictures from Man of Roma’s place”