Dafna asked me to write about the Roman Saturnalia, a festival in honour of Saturn.

“Inspired by Richard’s musing about Christmas – she said – I just discovered the term: ‘Beginning in the week leading up to the winter solstice and continuing for a full month, Saturnalia was a hedonistic time ….’ Sounds like fun.”

So here we are Dafna, although my mind is blurred by all this saturnalian revels, starting in Italy on Dec. 24 and ending with the Epiphany, Gen. 6.

Quite a long time isn’t it. 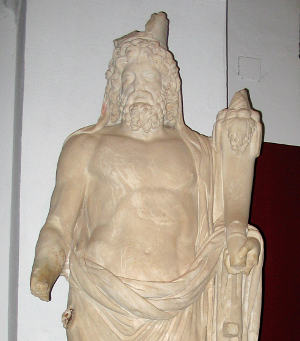 Saturn, the Roman god of seed and sowing, very ancient according to sources, had his temple built at the foot of the Capitoline hill. It housed a wooden (later ivory) statue of the god filled with oil, holding a scythe and whose feet bound with woollen threads were released only in the days of the Saturnalia – Dec. 17 onward.

The temple was rebuilt three times and today’s eight-column remnants (see the image below) represent what is left of its last remaking.

It is no coincidence, I believe, that the temple also housed what was most precious in Rome (coins, ingots etc.,) ie the city treasury or aerarium. Why?

Because to the Roman mind Saturn – who defeated by his son Jupiter had found refuge in Latium, on the Capitol – had brought to the Romans and Latins the mythical Golden Age (Aurea Aetas,) an era of bliss when men were equal, laws not necessary, spring eternal, earth spontaneously offering its blonde corn and rivers of milk and nectar marvellously flowing.

Words from the Past

Mario: “Wow, the Golden Age. Were men of solid gold too?”
MoR: “Possibly. Yes, if I well interpreted Lucian’s Saturnalia.”

Let us then listen to the arcane words of Ovid just to catch glimpses of it all (Metamorphoses, I, 89 & ff.)

Now it is clear that the Saturnalia was a sort of re-enactment of such primordial, lawless age when men lived in equality and abundance of all.

During Saturnalia the rich gifts of the earth were celebrated with feasts and banquets where celebrators, heated with wine, were allowed to trans-gress unto higher (sometimes lower) states of mind which could include wild games, spirituality, esoteric acts, gambling, sexual promiscuity, exchange of gifts, and where slaves were given the broadest license which reminded the ancient rule of equality amongst men. Many similar ancient collective ceremonies (like the rites of Dionysus known in Rome as the Bacchanalia) were often referred to by the Greek term ὄργια or the Roman term orgia.

Unlike the cult of Saturn almost unknown outside Latium, Saturnalia became the most popular festival in every province of the empire relished by the people of any social condition until the triumph of Christianity.

The Christians couldn’t entirely abolish Saturnalia so they absorbed it into Christmas and this pagan festival survived also in other disguised forms as we shall see (in Italy, England, Germany, France etc.)

Let us try to better understand. A few aspects of Saturnalia may in fact sound weird to us modern people.

Cycles and Rites of Passage

Saturnalia belonged to those rituals typical of the most ancient agricultural cultures all the over world.

Such cultures had a cyclic more than a linear view of time.

Universe, history repeated themselves in an eternal return to mythical ages in a way that the end of a cycle (light, sun, year, moon or season cycles) coincided with a new beginning; that dissolution coincided with regeneration; that chaos, lawlessness and transgression transmuted themselves into a new order where people felt renewed and ready to get back to norm.

These passages were celebrated in festivals where “such dissolution – Chiara O. Tommasi Moreschini argues – we notice in the overturning of social hierarchy and in sexual promiscuity, a way to achieve fertility; we notice it in Sacaea, a festival in Babylon or in Pontus in honour of the goddess Ishtar or Anaitis which included, among the rest, a king disguised as servant; in the Zagmuk celebrated in Mesopotamia at the beginning of the year and comprising both sexual license and a symbolic dethroning of the king; in the Kronia [in Athens and Attica, MoR] and in the Roman Saturnalia [Roman Saturn and Greek Kronos sort of merged] but also in women-only festivals like the Greek Thesmophoria [in honour of Demeter] or like the Bona Dea rituals in Rome [of which a description is in our Sex and the city (of Rome) 2] where women were offered a chance to indulge in some excess in their own way.”

Now I believe this whole spiritual past (plus the evelasting effects of nature changes) left deep traces in today’s minds. We still feel this deeply emotional (and sometimes distressing) end-beginning of something during the Christmas / New Year festivities, like a seismic shift that takes hold of us a bit. And at the same time we feel the family sweetness and Christian religious vibrations.

Which brings us to Christ’s birth.

Given the popularity of Saturnalia the founders of Christianity desiring to win the pagans to the new faith absorbed the Saturnalia into the celebrations of the birth of Christ.

Saturnalia started Dec. 17 and ended Dec. 25, day of the winter solstice according to the old Julian (Julius Caesar’s) calendar (12/21 according to ours, the Gregorian.)

Now, when was Christ born? No one knew exactly – although some biblical evidence suggests Spring.

It was Pope Julius I who in 350 CE chose Dec. 25 (winter solstice according to Caesar’s calendar.) Which proved a wise decision not only because of Saturnalia end date but also because in that same 12/25 the birth of Mithra / Sol Invictus, the sun god, had long been celebrated – the winter solstice being in fact the death-rebirth of the sun.

And, it must be said, the sun god in all his forms was very popular. Before it was gradually replaced by Christianity Sol Invictus was actually the official cult of the late Roman empire.

Extropian: “According to Tom Harpur (The Pagan Christ) “few Christians today realize that in the 5th century CE [so 4 centuries after the birth of Christ!] pope Leo the Great had to tell Church members to stop worshipping the sun.” ”

MoR: “Well, as I have said, we all feel – a Westerly universal feeling – like a strange conflict during these holidays: between holiness and fun, excess and good-will, religious /family feelings and pagan consumerism.”

MoR: “A conflict generated perhaps by that old compromise – eg the adaptation of Pagan rites to Christian rites – and absent probably at the times of the Saturnalia, when trans-gression and religion (trans-gression in the original sense of ‘going beyond’, from Latin trans + gradior) were not always separated as they are today. On the contrary, they at times coincided. τὰ ὄργια or orgiae, characteristic of mystery cults, were a supremely mystical & ethical experience, which is incomprehensible today, after almost two thousand years of Christianity.”

63 thoughts on “Survivals of Roman Saturnalia in Christmas, New Year and Carnival? (1)”