[When we are extremely young and we stumble upon a girl in the street who is our type we are like struck dumb and our pain is all the more acute the more difficult (or impossible) is the satisfaction of our desire, sudden and absolute.]

[A passage by Jack Kerouac renders well this desperate vitality typical of early youth (from “On the Road” I was leafing through days ago; I think I remember J.D. Salinger wrote something similar too)]:

“I had bought my ticket and was waiting for the LA bus when all of a sudden I saw the cutest little Mexican girl in slacks come cutting across my sight. She was in one of the buses that had just pulled in with a big sigh of airbreaks; it was discharging passengers for a rest stop. Her breasts stuck out straight and true; her little flanks looked delicious; her hair was long and lustrous black; and her eyes were great big blue things with timidities inside. I wished I was on her bus. A pain stabbed my heart, as it did every time I saw a girl I loved who was going the opposite direction in this too-big world”.

[Actually things ended up well for Kerouac’s character since the two will accidentally meet in the same bus and a love affair will ensue, although the description of the ‘stab’ is intense and in any case I believe it is exactly what each of us, man or woman, has experienced several times from 10-12 years of age onwards.]

“California is a fine place to live – if you happen to be an orange.”
(Fred Allen, American humorist)

I’ll link this jest to the sense of emptiness I perceived while staying for a while in Venice, Los Angeles (see picture above,) some time ago.

One of the social milieus I stumbled upon was this weird bunch of people who, while hoping to find a job in the entertainment industry, had this everybody-sleeping-with-everybody type of lifestyle who puzzled me because of its total nihilism and emptiness, or so it appeared to me.

Not that the writers that have lived in LA have greatly contributed to better this image of pointlessness and malaise, from Aldous Huxley, to Raymond Chandler (with his marvellously depressed Philip Marlowe) and the more recent James Ellroy (The Black Dahlia, The Big Nowhere etc.).

So maybe what Fred Allen said is kinda true.

But I also keep the most beautiful souvenirs of San Francisco, northern California. I was close to my twenties and I had never been to SF or America before, to tell the truth. Didn’t have to. They simply materialised before my eyes in Trastevere, Rome, in the years between the 60s-70s, via the cute face of a half-Mexican girl from SF, her name Mariza, who worked for an airline company out there and who totally bewitched me and accepted to share a small and cheap flat in via della Lungara.

This place soon attracted a long series of eccentric individuals: a gay pianist from Kansas City (of German origin, his Bach was pure magic), a lesbian paintress from Santa Barbara, a Vietnam vet from SF as well, a bit spaced out and hopelessly addicted to alcohol, plus this intense actress from Chicago (the link tells about her) together with many other odd American characters.

Mariza was one of my sweetest experiences, intelligent, attractive and cultured. Those were the days of the hippies who had found in the San Francisco’s Haight-Ashbury district one of their homes. She introduced me to SF’s counter-culture from a high-level angle and we were singing the beautiful Scott McKenzie‘s song “San Francisco (Be Sure to Wear Some Flowers in Your Hair)”:


A new explanation …such big words!

And Trastevere became our Haight-Ashbury (see below its main piazza and gathering place, S. Maria.) We felt all brothers, no matter the race, the religion or the country. Such an extraordinary place, Trastevere, not yet so trendy at that time and populated by these unconventional expatriates plus of course the locals, real Romans beyond any belief.

Oddly enough, on the stage of this ancient theatre I first met young America and its sparkling fresh mind. Not only my English began to improve.

But we were not hippies. Being not saints either there was not much place though in our experiences for nihilism or malaise. 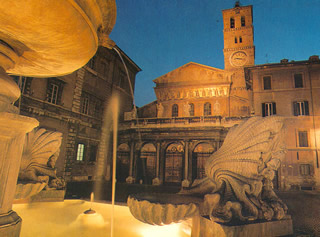 So full we were of our romantic dreams, whether our naïve ideals were guiding or misguiding still remains to be seen.