I was born puny, a real peewee, since my mother during pregnancy had to suffer two severe afflictions: the death of her father and of her twin sister Giuditta. At baptism the names that prevailed were Carlo and that’s fine but Guido Ettore and Augusto I wonder why.

I was thus born so small I had the great merit of almost not making my mother suffer by coming to this world. Not only was I born frail but also had all possible and imaginable diseases.

My father, despairing for his first son’s extremely poor health, the son he had danced and sung for, took me to all possible doctors and specialists in Rome though obtaining from all of them but the most sorrowful and definite responses.

“But after all you’re so young you’ll soon have another child.”

Poor me what gloomy prognostications. Thus my father took an extreme decision. He got rid of doctors and medicines and took care of me in his own way, according to his common sense.

Fresh air, light, sun, bloody-rare steaks and red wine, swims in the Tiber, very ordinary and rudimentary exercise, running, walks, continuous motion. He saved me and raised me into what I later was and am.

At four and a half I could swim and at eight I swam across the Tiber alone without any help (though my father was keeping an eye on me on a boat). I reached the other bank with eyes popping out of my head, but I made it, to my father’s great pride.

He, a good swimmer, not a long-distance but an academic one I would say, had taught me to swim through a hard and brisk method and pushed me to progress by saying:

“What an ass! Dogs and cats swim, sheep and pigs, oxen, horses – and you still don’t know how to swim! Aren’t you ashamed!”

And I felt so ashamed that I cried. Imagine when I finally could float and could take a few strokes or kicks without drinking or drowning! I was like mad with joy and I did nothing but swim, as if they paid me for every kick.

And in fact I swam so much that I became a great long-distance swimmer: that is, I was like cruising in the river, in the sea, in Albano Vico Bracciano and Trasimeno lakes, in Bolsena Como and Maggiore lakes, for considerable stretches, always alone, without assistance from any boat or company: this to test myself and make use of my skills, to provide myself with the feeling and proof that water was really the most entertaining means of transportation, the aptest and the cleanest most of all, especially in summer.

The bathing season started for us on May 1, Labor Day and therefore school vacation, and ended in late November when with the first cold weather we couldn’t stand to stay in water any longer.

This swimming thing was very important to my father (stultus neque scribere neque natare scit, as Cicero said and as my father a bit emphatically repeated.)

Gigi the grenadier could also swim well and was very athletic in water but was subject to cramps.

Paolo was instead too nervous to be a good swimmer. Like Paolo, my mother and the females of the family were not aquatic, in the natatorial sense they were like irons my father said (“they fall into water and blum they sink”).

But it is very well explainable since at that time [end of 1800, MoR] women could not swim but in sea water where they did exercises fully dressed. And we never went to the sea-side since for economic reasons we never left Rome. Only every now and then we went on long enough excursions on a four or two wheel small cart which my father rented by the day.

This to us, Elvira and me, was a feast.

Lichanos
But I don’t understand why you say the Jews are the most ancient Romans. What about non-Jews whose families have been in Rome just as long? Or are there none, what with migration, free movement, and the currents of history? Are you saying that the ghetto and the social restrictions on Jews kept their community intact all that time while others dissolved? THAT would be quite an irony!

MoR
Yes, the ghetto, the social restrictions and the tenacious interrelation ethnicity / religion / nationality typical of the Jews helped them to remain sort of intact compared to other Romans, I believe [see below the ethnicity thing.]

Are they Roman, Jew or both? Both in my view. And their Roman side is very ancient, there’s a lot of evidence: their cooking, their behaviours, their vernacular sooo Roman and archaic to our ears.

I mean, why shouldn’t they be Roman? After living in Rome and beholding the Tiber for 2,000 years …

An irony? Roman-ness has nothing to do with an ethnic group. It’s cultural transmission, like at the (multi-ethnic) times of the Empire.

I’ll try to explain this roman-ness concept the way I see it.

A. Being Roman in antiquity meant an ethnic thing only in early Republican times. With the late Republic and the Empire “Rome” and its territories became a huge melting pot, more or less like America today (Pompey had Celtic blood and Cato the younger had a slave among his ancestors.)

Very strong cultural traits [one can check ‘Romanitas’ in any history manual] were transmitted to Berbers, Greeks, Syrians, Jews, Gauls, Spaniards, South and West Germans, Romanians etc. Even the class of the emperors was multi-ethnic, and polytheism made every creed and religion accepted. Focusing on Rome only, it was additionally populated by so many slaves coming from anywhere that it is foolish to think in terms of a Roman “race” surviving today.

B. Being Roman today. As for Romanness today, I clearly feel connections between an ancient Roman and a Roman of today.

The ancient Roman populace progressively lost its simplicity, temperance and character. Even the poor were proud of living in Rome (the Jews were among the poor) and had ‘panem et circenses’ without any merit.

Privileged and spoiled compared to other folks they became bit by bit crass, indolent, cynical, blasphemous, braggart, with a couldn’t-care-less attitude towards anything.

They nonetheless retained bits of magnanimity, of a sense of universalism, and a good nature and compassion that comes from the ancient Romans (yes, the Romans were compassionate and had a good nature).

Their vulgar Latin turned little by little into this loose modern dialect that is either loved unconditionally or hated in this country, and which can be terribly concise and abrupt. The true Roman – a species dying out – doesn’t speak that much, he is ironic, full of humour, and can knock you out with very few words, as the Calcagnis, my grandmother’s family, could do (and did).

We are all sons of the base empire a bit! But in our decadence there’s vitality and toughness – some old Romans look like lions and jump off the Tiber bridges even in their 70s.

And, when Leone Limentani the Jew exclaimed: “The edict doesn’t forbid me!”- it was a typically Roman (more than Jewish) scene [see the previous post for it.]

The previous post on the Roman Jews had kicked off an interesting conversation with readers and especially with Lichanos on a theme central in this blog: Romanness past and present.

Lichanos’ energizing comments have though compelled me to clarify and integrate what I had in mind. I really thank ALL my readers for their contribution. Discussion helps to clarify and enrich lumpy mind stuff still at an intuition stage (see my method post.)

My friend Mario has told me recently: “You are exploiting your commentatori”.

Roman-like, and using polite words in my translation, I told him he better shut his helluva mouth up.

MoR
So what Davide Limentani said is probably true: the Roman Jews are the most ancient Romans surviving. The origin of their roman-ness appears to be prior to the era of the Flavian Emperors. Actually Jews have lived in Rome for over 2,000 years!

Lichanos
I don’t understand why you say the Jews are the most ancient Romans. What about non-Jews whose families have been in Rome just as long? Or are there none, what with migration, free movement, and the currents of history? Are you saying that the ghetto and the social restrictions on Jews kept their community intact all that time while others dissolved? THAT would be quite an irony!

MoR
Yes, the ghetto, the social restrictions and the tenacious interrelation ethnicity / religion / nationality typical of the Jews helped them to remain sort of intact compared to other Romans, I believe.

Are they Roman, Jewish or both? Both in my view. And their Roman side is very ancient, there’s a lot of evidence: their cooking, their behaviours, their vernacular sooo Roman and archaic to our ears. I mean, why shouldn’t they be Roman? After living in Rome and beholding the Tiber for 2,000 years …

An irony? Romanness has nothing to do with an ethnic group. It’s cultural transmission, like at the (multi-ethnic) times of the Empire.

Lichanos
Touché! The stereotype inverted! I was thinking it was ironic because Jews are usually thought of as the “other – not us” group, so it seemed ironic that they would be the most Roman. Of course the Jews are the most Roman, stands to reason given their history there…

MoR
Jews … usually thought of as the “other – not us” group
A bit being due to elements of the Jewish culture, people who see the Jews as aliens are either racist, stupid or narrow-minded (I’ll bypass the religious fanatics). Variety is what makes life interesting! Plus they are usually very intelligent, which is not bad these days.

My personal take on Romanness has been pruned from the above conversation for the sake of readability. See the upcoming post for it. The Roman Jews (2) writing will soon follow. 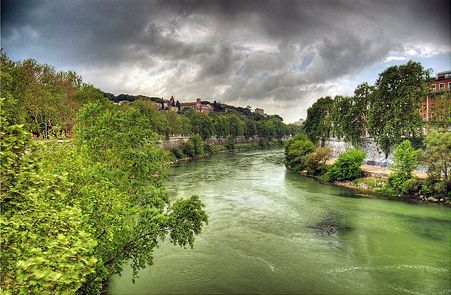 It is summer vacation and this blog is going to sleep for one month. I need some battery recharging and since I cannot leave town I’m offering you this beautiful picture of the Tiber, the sacred river of Rome. See you in one month then!